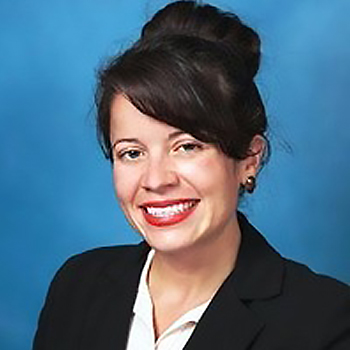 From fire ants to biodegradable polymers: The story of the risk-taker Katrina Knauer

This is the story of our risk-taker Katrina Knauer, Polymer Scientist at BioCellection Incorporated. Katrina’s journey into the sciences started when she was very young, in a story she defines as “kind of cheesy”, but is absolutely amazing! When Katrina was around 11 years old, she had to complete a science fair project in her school. Instead of creating volcanoes or mixing up soda with Mentos, Katrina focused her project on something much more meaningful that helped her dog, Penny. What did Penny and Katrina’s science fair project have in common? Well, it all starts with fire ants, which are a problem in Florida during summertime because the bites are really painful. To avoid getting bit (or having any contact, really) with these not very pleasant insects, Katrina’s mom used fire ant pesticides at home, which Katrina was convinced were making her dog sick. To make sure her dog would not get hurt, Katrina tried to find eco-friendly alternatives to kill fire ants during her science-fair project. She won first place and had the opportunity to participate in big science competitions. This was Katrina’s first insight and indication that “one of the ways we can start helping with environmental problems is through science and chemistry.” She then started to follow the environmentalism and sustainability path to solve not only Penny’s issues using science, but our world’s.

Knowing that chemistry was her passion, Katrina went to Florida State University (FSU) to pursue her undergraduate studies. At FSU, she was hired as an Undergraduate Research Assistant at the High-Performance Materials Institute (HPMI). Her field of work? Polymers! During her studies, Katrina understood that our plastics are cheap polymers with remarkable properties. They improved our quality of life significantly, but due to their abundant and reckless use, plastics became a “plague” to our environment. However, Katrina believed that, just like chemistry was often misunderstood, plastics were also misused. She decided to dedicate the rest of her research career to polymer chemistry, “in attempts to try to find ways to improve sustainability around plastics.” Katrina pursued her Ph.D. at the University of Southern Mississippi specifically in polymer chemistry and then worked on recycling technologies and end-of-life solutions for plastics at BASF Corporation, the largest chemical company in the world. However, life always finds a way of surprising us and during one meeting, Katrina met Jennifer Le Roy, the Director of R&D at BioCellection Inc. Katrina simply felt in love with the ideas and goals of the company, took the risk and introduced herself to Jennifer after the meeting, leading her to start making new polymers with the amazing team at BioCellection Inc. in July of this year. So, take that risk, you never know where it might lead!

Take the risk and if necessary, accept the failure (for 24 hours, only)

When asked about the important traits for her success, Katrina’s first mention was her ability to communicate well: “I pride myself on taking complex chemistry, complex data, and presenting it to people in a way that doesn’t make them shut down”. As a scientist working with sustainability, Katrina started to get aware of the importance of making people excited about the work instead of making them feel bad about their inherent environmental impacts. With the help of her friends and family, Katrina tried new ways of getting her message across and making herself “approachable and not abrasive”.

Katrina also describes herself as a person who does not like waiting around, she just takes the risk: “If I have an idea, I want to just try it. I don’t want to have meetings about it, I don’t want to sit around and plan it out, I want to just to go in there, do it, and see if it works.” Also, if one of Katrina’s project does not work out the way she expects it, she does not spend a lot of time being upset about it: “You get 24 hours to feel sorry for yourself, that’s all you get! Then the next day, you have to go back, start it again, and try it again!”

At BioCellection Inc., Katrina and her team are “inspired by garbage” and invented a process that takes plastic waste and breaks it down into useful chemical building blocks. You might be thinking right now: “Well, why can’t we just recycle plastic instead of breaking it down?” To explain this, Katrina gives us some background about conventional mechanical recycling of plastic, which currently presents some problems: “There are significant challenges surrounding conventional mechanical recycling of plastic. The plastics tend to degrade and are contaminated with additives, inks, and adhesives during the process. The product that results from mechanical recycling is usually a mixture of materials that are downcycled into lower value products. It’s not really a true circular solution and not very economical, because the resulting products are typically used once and thrown away.”

Therefore, Katrina and her team at BioCellection Inc. are using a non-energy intensive, proprietary technology to accelerate a reaction that breaks down plastic into smaller molecules. These smaller molecules can then be transformed into high-value polymer materials: “We are taking a free feedstock and making a higher value product from it, so that if further down the road a developing country licenses this technology they would now have a product that they can actually generate a strong economy from.”

Katrina highlights that all the single-use plastics around us are not trash, but interesting chemical feedstocks: “They can be re-used, re-purposed, and built back up into something that’s worth even more than what the shrink wrap was when it was disposed of”. Katrina and her team are not only inspired by the significant social environmental problem that plastic waste is, but also inspired by the useful and cool chemistry behind it.

Green chemistry and the future of invention

Green Chemistry plays a major role and is a big focus during the invention process at BioCellection Inc. Katrina believes that technological advancement can only happen if it is minimizing the environmental impact: “We don’t want to solve one problem by creating another problem.” At BioCellection, Katrina and her team always consider, in the chemical and chemical engineering aspect of their invention processes, the possibility and ability to make them as sustainable as possible. Katrina sees Green Chemistry being the core of Chemistry. In her opinion, “it’s almost to the point where we really don’t have a choice anymore. The big players are changing, we are changing, and Green Chemistry is the future.”

Katrina also sees the future of chemistry innovation as a bright one. She highlights that projects involving green chemistry and sustainability have become a new trend in the chemistry world and that chemists are also more entrepreneurially focused. “I get really excited about entrepreneurially focused chemistry and the desire to solve these big environmental problems. It seems like everybody wants to go in that direction and that is really, really exciting to see.”

"When I think about future innovation, I see society using chemistry to solve the world’s problems."